How to Model with DomoRoboto
Currently there are three primary modeling tools. Their uses are explained in this document.
EventStorming
Context Mapping
Topo Architecture
You will also need to use the menus and modeling views, which are explained next.

Your robot's tools are increasing in number and variety, bringing more capabilities that lead to breakthrough modeling outcomes. Keep pace with our regular releases!
Toolbox

At the top of the following tool view is user menus as well as modeling views and toolbox. The view is the default, EventStorming model, with toolbar. 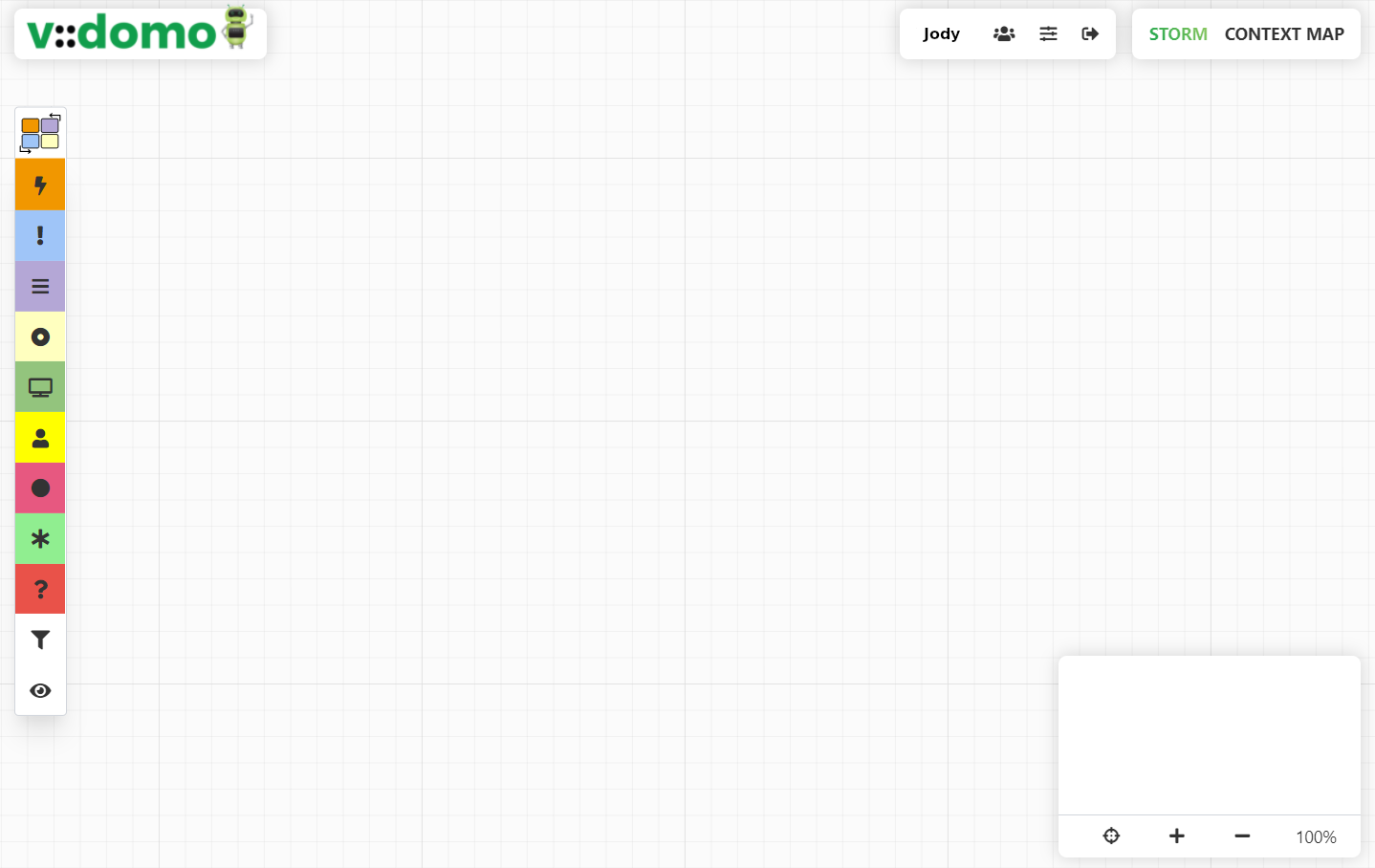 Each of the menu options and modeling views are explained next, followed by details of each modeling view and its tools.

The menus at the upper right provide user-level options and model views.

The toolbar to the left contains the modeling perspective switch along with the modeling elements that are used for EventStorming. Note that the colors reflect those typically used for specific element types. An icon is provided for those new modelers and those with color blindness. In order, these are the element types and their use.

The EventStorming compact view is useful when modeling at the "design-level," which is much closer to the implementation. In this mode you can stack all commands, policies, events, etc., around the associated entity (e.g. DDD Aggregate tactical modeling tool). You can see this style in our VLINGO XOOM Designer.

The following is a portion of an EventStorming model that, although incomplete, demonstrates a number of model element types.

The above is a "big-picture" model; that is, one that lacks some details and precision. Yet, the modelers have learned enough to identify multiple subdomains within a single timeline. The modelers make divisions using the DomoRoboto subdomain container tool with the subdomain name and an indication of its life cycle condition. For example, subdomain containers with a green oval represent new or clean contexts, while the legacy system is marked with a brown oval (brownfield or Big Ball of Mud).

In review of the example model, this table indicates the modeling elements employed and why they are used.

The more detail given, the closer the storming session becomes "design level." Think of the above

Context Mapping is one of the strategic modeling tools defined by Domain-Driven Design. This tool is used to understand and visualize the dependency relationships between multiple Bounded Contexts and the teams that own them.

The relationships shown in a Context Map are relative to a problem space domain. Teams are generally considered by their peer-to-peer or upstream-downstream dependencies.

The following is a portion of an EventStorming model that, although incomplete, demonstrates a number of model element types. 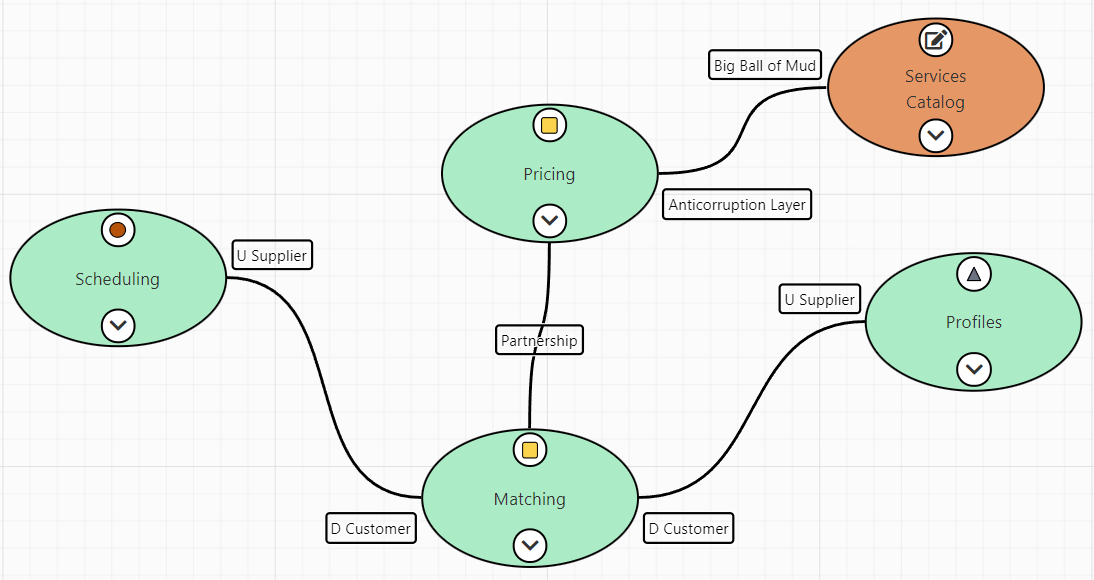 Some examples follow. To illustrate the use of the Topo Architecture view, the following limited EventStorming Pricing model is assumed.

Since the Topo Architecture is accessible in the Context Map, the user interface is the same that you see above in the previous Context Map section. Here's a close-up of the Pricing Context. In particular, notice the properties icon at the top and the drop-down arrow at the bottom. 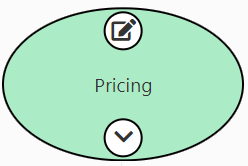 Click the properties icon at the top of Pricing. You'll see the following properties dialog. You can select the kind of Bounded Context it is: Core, Supporting, or Generic. You can enter other information, such as the names of the subdomain, business capability, description, and team members. 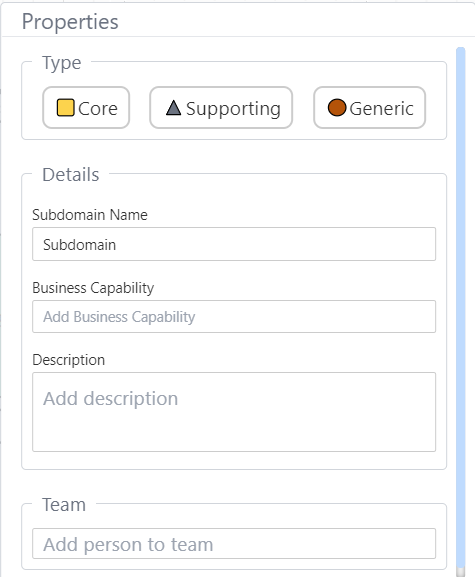 Select Core and enter some information, such as the description and the team members that work on the context; just enter some given/first names. By clicking outside the properties dialog, it is dismissed. The properties have been persisted.

The topographic summary view is seen in the next image. To the left you see the model elements that drive it, those inside the domain model in the center, and those to the right that it uses to drive results outside.

If you now return to the EventStorming view of the model and enter some new elements to Pricing, they will be reflected in the Topo Architecture view. Consider the following elements that augment the Pricing model.

What is reflected by this new model? The following elements were added to the Pricing model:AnalyzePricing, PricingAnalyzer, PricingHistory, and PricingVerified. 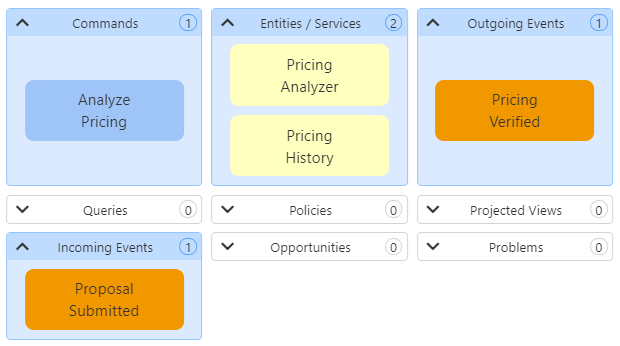 Giving more thought to the model, the team has not yet determined the business rules for pricing analysis. They don't currently have immediate access the the right domain experts, so they decide to include a policy to the EventStorming model to indicate a placeholder for the necessary rules.

As it previously happened, the addition of the Time-based Pricing Policy to the EventStorming Pricing model is reflected in the Topo Architecture view. Once again, switch back to the Context Map view, click the Pricing drop-down icon, expand each of the non-zero element types, and you will see the following. 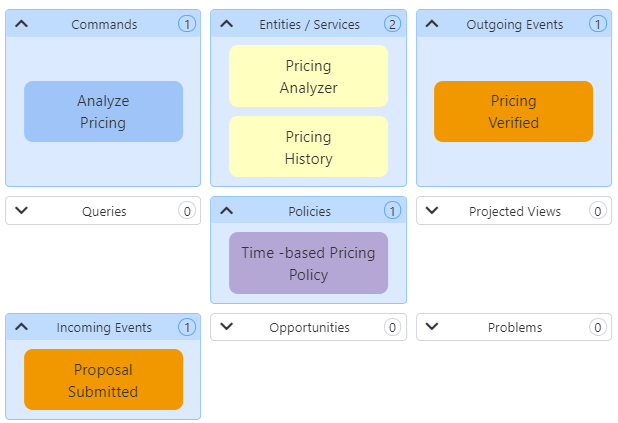 As more modeling decisions are made and declared in the model, the majority will be displayed on the Topo Architecture model view. For example, when adding one or more View (green element) on the EventStorming view, it will be reflected in the topographic view as a Query on the left side and a Projected Views on the right side.